Delegates propose publishing a magazine for members, decide the salary of officers set commons goals to live and work with dignity, with care for their safety and concern for their families. 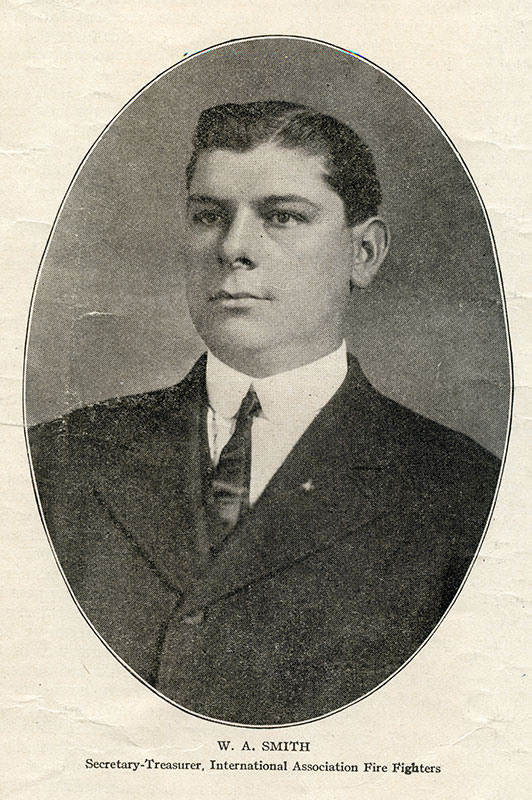 Thomas G. Spellacy of Schenectady, New York, is elected the first president and William Smith  the first Secretary-Treasurer, neither of whom stay on past 1920. Spellacy compares the formation of the IAFF with Christopher Columbus’ discovery of America.

The IAFF adopts 20 resolutions to benefit fire fighters and the fire service, including a two-platoon system, pension laws, automatic sprinkler systems, building inspections and removal of hazards for fire prevention.

“If you do not organize, and expect to get the cooperation of the citizens in general, you may wake up some fine morning and find that the citizens in general do not respond to your request. You know that the moneyed class will never hand you anything without a hard fight for it; therefore, if the class to which you belong should not cooperate with you in an unorganized body, you should not blame anyone but yourself.”
William Smith, IAFF Secretary-Treasurer (1918-1920)

War-time standards decree that there should be no strikes or lockouts during the war.

“Yes, this life may seem rather easy,
This waitin’ around for the bell.
But just put this down for your motto,
That when it ain’t easy – it’s hell.”
William B. George, Captain No. 8, Hose Co., Local No. 64, Kansas City, KS The inaugural issue of the International Fire Fighter magazine is published – 10,000 copies are distributed. The cost of a yearly subscription is $1. Article 11 of the Constitution specifies that the organization shall be non-partisan and shall not promote the candidacy of any person seeking public office. Thomas G. Spellacy of Schenectady, New York, was elected president at the first IAFF Convention in 1918. He chose to be Local 28 because he served on Engine 28 in Schenectady. President Spellacy took on the profound responsibility of developing the IAFF’s core mission of improving wages and benefits, increasing fire fighter safety and creating basic job security for fire fighters. He left office in 1919, handing the office over to 1st Vice President Samuel A. Fink. William A. Smith of Washington, DC, was elected the first IAFF Secretary-Treasurer in 1918. In 1913, Smith was instrumental in forming and serving as secretary of the Fireman’s Association of the District of Columbia, which was later chartered as Washington, DC IAFF Local 36.

Smith introduced the first Convention resolution to be adopted by delegates, which resolved to form an international organization of unions and to affiliate with the American Federation of Labor.

From time immemorial there has been opposition to ideas and different projects as planned in accordance with the progress of the times. That many of these ideas have fallen short of reaching their mark goes without saying, and a great number have even succeeded the fondest anticipations. Among the latter we include two – Christopher Columbus in the discovery of America and the International Association of Fire Fighters. Nor I do not for an instant wish to infer than an analogy may exist in the way of a comparison between the noble and daring explorer, who discovered this beautiful, glorious country, and the formation of a body of men, for any purpose—even though it be a firemen’s union – but what I wish to say, and that most emphatically, is that Columbus in explaining his views met with no more opposition than many of the locals affiliated with this International; but, like the great discoverer, their unions have been vindicated.

The influenza epidemic results in the loss of several thousand lives and taxes the medical profession to its limits. Fire departments have hundreds of men incapacitated at one time and several fire fighters die from the infectious disease.